I attended an art exhibition pertaining to Amyotrophic Lateral Sclerosis (ALS) which is a neurodegenerative disease. Before I dive into the art exhibition, it would help to be familiar with neurodegenerative diseases. Motor neurons are nerve cells that are located in the brain, brain stem, and spinal cord. These motor neurons provide the connection between the nervous system and the voluntary muscles of the body. You can think of these as telephone lines sending commands to destinations. In ALS, the motor neurons begin to degrade or die out, resulting in gradual and complete loss of motor functions. The cause of ALS is not known, and scientists do not yet know why ALS strikes some people and not others. An important step toward answering this question was made in 1993 when scientists supported by the National Institute of Neurological Disorders and Stroke (NINDS) discovered that mutations in the gene that produces the (Superoxide Dismutase 1) SOD1 enzyme were associated with some cases of familial ALS.  This SOD1 enzyme functions to remove reactive superoxide that is produce as a result of aerobic metabolism. Although it is still not clear how mutations in the SOD1 gene lead to motor neuron degeneration, there is increasing evidence that mutant SOD1 protein can become toxic because of the increase in superoxide concentrations, which is reported to have oxidative damages to DNA.

In this art exhibition, the artist attempts to portray the degenerating experience of ALS through sound waves and pictures that symbolize the folding of SOD1. The experience I had was quite unique because I had walked into the exhibition not fully understanding what was going on. I remember a dark room with a central pillar representing the spinal cord. The “spinal cord” were connected to speakers that sorounded the room, these were the motor neurons and muscles. As I walked through the room and the mutation of SOD1 mutant progressed, the sounds being produced became less pleasing and were discontinuous. Eventually, after about 4 minutes, the sounds were no longer bearable, which symbolized the degeneration of the motor neurons—loss of function.

Raising awareness of ALS through a festival in Oregon. 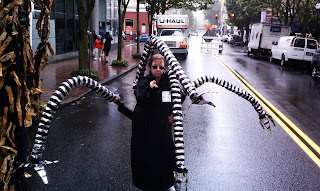 This is a great ad that depicts ALS. This picture shows a man with ALS and the trouble the spinal cord must overcome to send its message to the target area.

This picture tries to show what is going on at the cellular level. Here we have motor neurons.